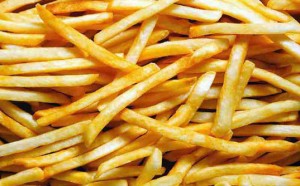 Thanks to Meatless Monday for tweeting this Time article today.

Ever wonder why French fries, potato chips and Cheetos are so appealing when you’re feeling stressed? A new study suggests that elevated levels of salt in the body lower stress hormones and raise levels of oxytocin, a hormone involved in love and other social connections.

The research, which was conducted in rats, was published in the Journal of Neuroscience. It found that rats’ response to a stressful situation — being tied down — depended on how much salt they had in their bodies. When restrained, rats with high salt levels showed less activity in their brain’s stress systems, compared with rats with normal salt levels.

Having high salt levels is technically called hypernatremia (geeky fact: the word suggests high levels of NA, the chemical abbreviation for the element sodium, which is an important part of salt), and rats in this state also recovered faster from being stressed.

Moreover, the hypernatremic rats had elevated levels of oxytocin — a compound known as the “love hormone” for its role in helping to create social bonds, between friends, lovers or parents and children. Oxytocin is crucial to the processes that allow love and social contact to reduce stress. Not surprisingly, rats with lots of oxytocin showed less anxiety in social interactions. (The effects of oxytocin are complicated, however — it doesn’t always produce love and trust — but it is a significant player in those emotions.

Bartenders often provide salty snacks to capitalize on what having hypernatremia is most likely to make you feel:  thirst. And indeed, drinking behavior may provide a clue as to why salt may be stress-relieving.

“We’re calling this the Watering Hole Effect,” said lead author Eric Krause, an assistant professor of psychiatry at the University of Cincinnati, in a press release. “When you’re thirsty, you have to overcome some amount of fear and anxiety to approach a communal water source. And you want to facilitate those interactions — that way everyone can get to the water source.”

No matter what they happen to be serving…